November 03, 2014
The brand awareness is nothing more than the popularity of a brand. Companies pine for it and in some cases invest a huge amount of money in order to increase it.

On the other hand the brand reputation is what people think about your brand, the perception they have.

But what happen if your popularity (so your brand awareness) rises, but your brand reputation doesn't?

This is what is happening these days to Moncler (a famous luxury down jacket company) after a television report on the Italian public television. In the report a journalist explains the unethical behaviours of the worldwide company. In fact, during the show Moncler has been accused of cruelty to animals, low quality, and exploitation of workers.

...and the day after the show, the web and social media gone wild.

The brand awareness has sharply increased against the brand reputation which decreased considerably. Twitter, Facebook and the web are brimming with negative comments and articles agaist Moncler which has decided not to answer to the public offences.

In few months certainly the web and the social will forget what happen, what will remain is the fact that Moncler popularity rises and as a brand will be recognised everywhere as a luxury company that made its way to a more ethical way of working.

Hence, a strong brand awareness or a strong brand reputation? What is better? For sure it is possible to change customer's perception of a brand, but difficult to destroy its awareness.

Popular posts from this blog

In order to increase the income Facebook decided to boosts video advertising. In fact, latest news say that in the next months there will be a video advertising every-time you open Facebook.

It is well known that Facebook is becoming the best advertising platform, because it can reach different target markets all over the world. However, it has to be said that the social network is loosing members (around 10 million in the last year) especially for what concern UK, where in the last year 1 million of members decided to delete their accounts. On the other hand, it is true that the number of members from developing countries is increasing.
Nevertheless, Facebook decided to aim at companies which want to advertise their products and increase their profits.
Statistics show that in US companies spend 4 billions of dollars for video advertising on social media, and the forecasts are that next year this data will increase of 41%. In light of this, Zucherberg decided to make his Social Network …
Read more

November 05, 2014
We all know that social media marketing is becoming always more important for companies, but what happen if your company is not a BtoC but a BtoB? are social media still useful for your company?

Generally speaking yes, they help you build a strong brand awareness and ease the hiring process, because if you are looking for candidates more people know your company and more possibilities you have to find the resource you are looking for.

On the other hand, wise is to use the right social networks, for instance if you sell software it could be useless to have a Pinterest or Instagram profile because actually you have no products to take a picture of (or maybe you can take a pic of their GUI?). What you can use to promote your business, instead, is LinkedIn which gives you the possibility to create ads based on your target market and target only Seniors that can be your potential customers.

Indeed, it's not easy to be a Social media Manager for BtoB but not impossible with money to inv…
Read more 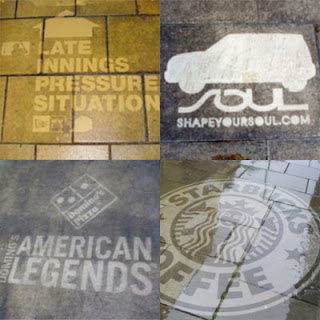 Have you ever heard about Clean Graffiti?

They are the latest Ambient Marketing tool, where creativity and environment are mixed together in order to develop a perfect and unforgettable marketing campaign.

But how do they work? Unlike they look like a painting, on the wall or on the street, they are absolutely legal because they are made by cleaning a public space. This is a new way of doing marketing entirely environmentally friendly.

Although the polemics about the Advertising pollution marketers and artists work together in order to create always new tools to attract new customers.

Here you can find the latest amazing clean creation.

What do you think about it?